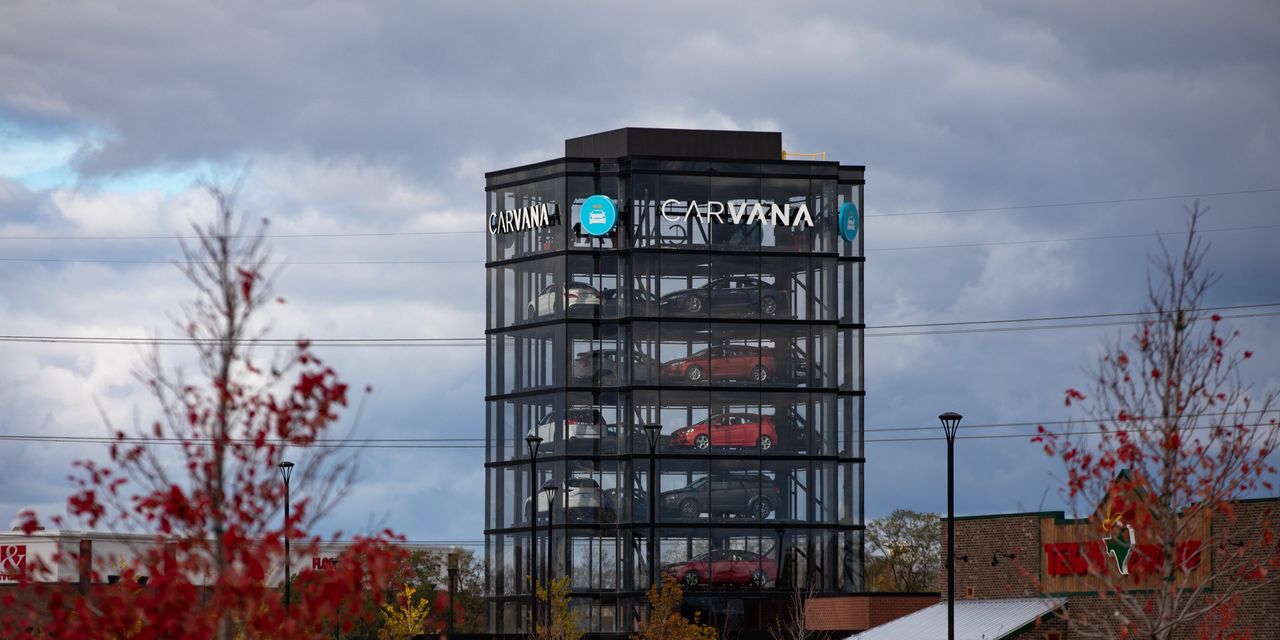 Carvana has a big loss in the first drop in sales

a pandemic star who has suffered during the recovery, announced its first-ever quarterly sales decline and said it would raise capital as the online used-car dealership grapples with disruptions to its operations and more difficult economic conditions.

Carvana shares fell as much as 24% after hours on Wednesday before recovering; they fell 9% in regular trade. Netflix, another star of the pandemic, fell 35% on Wednesday. Carvana announced plans to sell $2 billion of common and preferred stock, in part to fund the planned acquisition of ADESA US.

Carvana said it sold 105,185 cars to retail customers in the first quarter, down about 7,800 from the previous quarter, although up from a year earlier. Its net loss widened to $260 million from $36 million a year earlier. Gross profit per unit – one of the company’s favorite revenue measures – fell to $2,833 from $3,656 a year earlier.

Over the past six months, the tailwinds that propelled the company to rapid growth have turned into headwinds. Rising interest rates, falling used-car prices, inflation-conscious consumers and declining appetite for its debt have upended Carvana’s ambitious growth targets.

The retailer, which has just over $3 billion in long-term debt, said it was no longer providing financial guidance for the year due to rising interest rates, rising fuel prices and macroeconomic uncertainty, all of which affect the used car market. He said in February he expected retail sales of more than 550,000 cars for the full year.

“Over the next several quarters, we expect to better align sales with expense levels through a combination of sales efficiencies and higher expenses,” the company said.

Analysts had raised doubts about the company’s ability to meet its sales targets. Missing them could further reduce Carvana’s cash position. The company is still burning cash after about 10 years in business.

Carvana, based in Tempe, Ariz., has grown rapidly over the past two years, roughly doubling its quarterly sales volume since spring 2020 as more consumers shop online. But the company has faced backlogs in its logistics network and remanufacturing centers in recent months, in part due to labor shortages resulting from the Covid-19 wave caused by the Omicron variant. In response, it reduced vehicle purchases from consumers and limited availability inventory on its website.

Inflationary pressures dampened industry-wide sales in the quarter, analysts said. Rising car prices, which over the past year have boosted profits for used-car dealers, have become a burden on some consumers who are also spending more on gasoline and other household items.

“It’s not just a supply situation for these guys that’s hindering their growth. It’s also the demand situation, and it’s not something every investor likes at this point,” said Wedbush Securities analyst Seth Basham.

The Manheim used car price index fell 3.3% in March from February, seasonally adjusted, but was still 24.8% higher than a year earlier. Vehicle prices are expected to remain high through 2022 as the industry faces inventory constraints, including a shortage of semiconductors.

Prospective customers looking to sell their cars to Carvana told the Wall Street Journal that the company recently reneged on offers they had already accepted for their cars, in several cases lowering them by several thousand dollars while citing a problem in their pricing algorithm. The company said it remains committed to “continuous improvement” and improving the customer experience.

Carvana typically reports later in the earnings season, but said last week it decided to report on Wednesday to facilitate the closing of its planned $2.2 billion acquisition of the car auction business. used ADESA US. The deal is expected to close in May, the company said. .

One of the reasons Carvana is affected is the way it accounts for sales of auto loans that it packages into securities. Carvana records immediate gains, unlike its competitors who record them over time. Such accounting helped the company boost revenue when consumer credit — and investor demand for securities backed by auto loans — was particularly strong.

But conditions in the securitization market have recently changed. Investors are demanding higher yields for securities backed by riskier consumer loans. They are beginning to fear that rising rates and inflation will affect borrowers’ ability to make payments.

Carvana issued two securitizations in March — one backed by prime auto loans, the other backed by subprime loans — with a combined value of around $1.49 billion, according to Finsight, a provider financial data. In both cases, Carvana saw less profit on deals than in the past as investors demanded higher returns from deals Carvana closed in the fourth quarter, according to data provided by Wedbush.

Overall, Angel Oak has been more focused on buying asset-backed securities in the secondary market, rather than directly from issuers, Triick said. This is because the auto loans that underpin these bonds are older, meaning they were issued when car prices were lower, and also have an established repayment history, he said.

What sites do you use to search for used cars? Join the conversation below.

Growing investor caution in the securitization market weighed on Carvana’s earnings in the quarter. JPMorgan Chase & Co. analyst Rajat Gupta estimated in March that the company’s gain-on-sell margin from loan securitizations – a measure that compares proceeds received to the total value of loans sold – had fallen. to 4.4% in the first quarter, against 9.1% in the previous quarter.

The stock offering came as a surprise to investors as Carvana said it had received committed funding for the ADESA deal. Chief Executive Ernie Garcia III and his father, Ernie Garcia II, said they would buy some of the newly issued shares.

The acquisition of ADESA, a used car auction company that is an industry stalwart, came as a surprise to Carvana, who said it was aimed at boosting auto sales. Carvana executives said in February the deal would increase its ability to process vehicles and expand its logistics network, in addition to adding auction capabilities.

How the biggest companies work