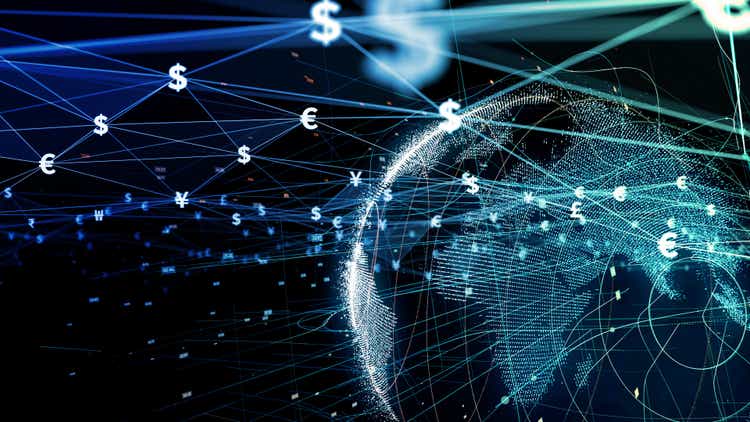 Fintech companies are disrupting the global economy with their innovative products. Global growth is expected to continue despite medium-term challenges such as rising interest rates and Covid-19. We believe the recent selloff once again provides opportunities for long-term stock selection.

PayPal (NASDAQ: PYPL) published his results earlier this month. Fourth-quarter revenue rose 13% to $6.9 billion and slightly exceeded estimates of $30 million. The low revenue forecast of 6% growth in the first quarter disappointed investors. On the other hand, the Dutch payment processor Adyen (OTCPK:ADYEY) reported strong results as its second-half revenue increased by 47% to €556.5 million and EBITDA (earnings before interest, tax, depreciation and amortization) increased by 51% to €357.3 million euros.

Upstart has gained popularity for its time-saving artificial intelligence lending platform in loan processing. 67% of Upstart loans were fully automated in Q3.

Management sees a huge opportunity in the auto loan market, as it is larger than the personal loan market. They also believe that auto loan customers pay higher interest rates for auto loans, which makes their AI platform an ideal choice.

Last year, it bought Prodigy Software, an automotive retail software provider, which further helped the company focus more on the automotive business. Revenue rose 250% year-over-year in the third quarter to $228.45 million and consensus analysts estimate revenue will rise 203% to $262.85 million in the fourth quarter.

Atlantic analyst Simon Clinch is bullish on the business as he believes there is upside potential for EBITDA from the automotive segment.

The company’s revenue increased 27% year-over-year to $3.84 billion. Analysts expect revenue to rise 28% to $4.05 billion. It recently completed the acquisition of Afterpay and has integrated Afterpay’s Buy Now Pay Later (BNPL) functionality to Square Online sellers in the US and Australia. This is a positive deal as Buy Now Pay Later becomes a preferred payment option for customers. It gives the flexibility to make the payments later without interest.

JP Morgan analyst Tien-tsin Huang is bullish on the deal and expects it to boost gross profits. He also thinks that “positive catalysts mitigate hard/soft landing risk for standalone Cash App growth deceleration in the near term.”

The company’s revenue increased 316% to $1.31 billion in the third quarter. For the fourth quarter, analysts expect revenue to rise 235% to $1.96 billion. Due to better business activity in October, management believes that retail monthly transactional users (MTU) will be higher in the fourth quarter than in the third quarter. For the month of October, it was 11.7 million.

The company announced that the waitlist started for the company’s NFT platform in October last year. It is expected to launch in the next few quarters, which should help the company provide more stability in earnings, as the cryptocurrency market can be volatile.

Bank of America analyst Jason Kupferberg upgraded the company from neutral to buy. He is optimistic about the launch of the NFT trading platform, as it diversified its sources of income to depend less on cryptocurrency trading.

Mizuho analyst Dan Dolev believes that the commission-free business model adopted by Robinhood is better than the fee-based model adopted by Coinbase. In his words, “If you think about three years, anything that pays off right now, like crypto trading, is going to be free.”

Sea Limited operates in the digital entertainment, e-commerce and digital payments and financial services segments. The company’s revenue rose 122% in the third quarter and analysts expect revenue to rise 92% to $3.0 billion in the fourth quarter.

It’s an exciting business to watch as it derives its significant revenue from Southeast Asia and more recently has focused on Latin America. Both regions have better growth opportunities than developed countries due to untapped opportunities in e-commerce and digital payments.

Goldman Sachs analyst Miang Chuen Koh removed the stock from Goldman’s convictions list. “While Sea (SE) remains on a growth path, with an expanding e-commerce footprint and its multiple studios finalizing games for release over the coming quarters,” analyst warns slowing economic growth will limit the growth of its three guidelines.

MercadoLibre has been popularly known as the Amazon of Latin America. The company is benefiting from the robust growth of e-commerce and fintech in the region. The stock is up around 450% over the past five years. MELI quarterly active users posted strong growth in the third quarter, growing 50% year-on-year to 78.7 million and fintech unique users grew 13% to 31.6 million. The company’s revenue rose 67% in the third quarter, and analysts expect fourth-quarter revenue to rise 53% to $2.03 billion.

Stifel analyst Scott Devitt lowered the company’s price target to $1,600 from $2,200 and retained the Buy rating. It projects GMV growth of 26% to $7.71 billion and a revenue estimate of $2.09 billion for the next quarter, slightly ahead of consensus. However, as the comparable valuation multiples of the company’s publicly traded peers declined, he lowered his price target.

Jefferies analyst John Colantuoni downgraded the company to Hold from Buy with a price target of $1,250, down from $2,000 previously. He notes that heightened macroeconomic uncertainty in Brazil, which accounts for 60% of the company’s revenue, could dampen MercadoLibre’s near-term valuation. He believes the company is in an ideal position to benefit long-term from attractive secular shifts in e-commerce and payments across Latin America and expects the stock to trade at the bottom of its range. historical trading until macro-economic uncertainty disappears.

Global remittance provider Remitly’s third-quarter revenue grew 69%. It was the first earnings report since it became a public company in September 2021. The full expiration of the lockdown is expected next month. It is a very popular platform for international money transfers. This is also evident as active customers grew 51% and average revenue per active customer increased 12% year-over-year to $47.34 in the third quarter.

Adjusted EBITDA was $0.3 million compared to $0.6 million for the same period last year. Analysts expect revenue to rise 57% to $125.36 million in the fourth quarter. Management waits full-year revenue is expected to grow approximately 74% year-on-year to a range of $445 million to $450 million.

JMP Securities analyst David Scharf lowered the company’s price target to $40 from $52 and retained the outperform rating. The analyst remains positive about Remitly’s leading position as an all-digital and mobile network, serving a large and expanding total addressable market and believes its secular tailwinds will continue. However, he warns that stocks could be volatile in the short term due to negative market sentiment.

Another promising startup is the Uruguayan payments company, which also went public last year. The company’s revenue rose 123% in the third quarter and analysts expect revenue to rise 115% to $74.52 million. The total payment value (TPV) increases 217% in Q3 to $1.8 billion.

Goldman Sachs analyst Tito Labarta has upgraded the company to Buy from Neutral and has a price target of $55. He believes that “the company should experience relatively minor impacts from rising interest rates given that it has no debt on its balance sheet and is not focused on early repayment of receivables”.